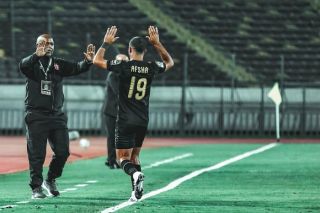 Pitso Mosimane’s Al Ahly have one foot in the final of the Caf Champions League after a resounding 2-0 win against Wydad Athletic Club in Morocco in the first leg on Saturday evening.

Mosimane stepped in as Al Ahly coach a few weeks ago and face his biggest assignment against the Moroccan giants who he had never beaten at home.

Al Ahly got off to a dream start as Mohamed Magdi opened the scoring in the fifth minute with a great finish after pouncing on a defensive error by Wydad.

Wydad then fought back and had the perfect chance to get back into the game when they were awarded a penalty after El-Shanawy brought down Gbagbo Magbi inside the box.

After a lengthy Video Assistant Referee (VAR) consulation, Badi Aouk finally stepped up to take the spot-kick but his shot from 12-yards was saved by El-Shanawy, who preserved Al Ahly's lead going to the break.

The Egyptians came out strong in the second half and the victory was sealed when Maloul fired home from the penalty spot in the 62nd minute a handball by Wydad defender Brahim Najmeddine inside the box.