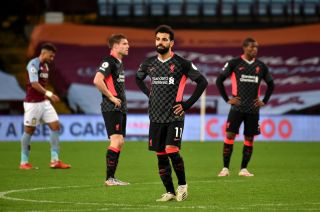 No, you need not have adjusted your TV set.

Liverpool conceding seven goals for the first time in their Premier League history – and the first time in any competition since 1963 – shocked the world yesterday, as they were thrashed 7-2 at Aston Villa on Sunday.

It's not often that Manchester United being thumped 6-1 isn't the first game on Match of the Day, is it?

Liverpool have been thrashed in the Premier League before. Not quite this badly, admittedly...

4-0 is generally considered a thrashing, right? 3-0 is a beating, but a thrashing... that's four goals or more.

Liverpool have been beaten by this scoreline three times in the Premier League era. On December 16, 2001, Chelsea wacked Gerard Houllier's side 4-0 at Stamford Bridge, and two years later (April 5, 2003), two Ruud van Nistelrooy penalties help sink the Reds 4-0 at Old Trafford, as Man United sauntered to the title.

On September 18 2011, Liverpool were beaten 4-0 by Tottenham Hotspur on Emmanuel Adebayor's home debut, the Togolese forward snatching two goals. That day, the Reds were reduced to nine men. At least that's some kind of excuse.

The season was 1992/93. Coventry City were a top-flight side and the Premier League was in its infancy. Jamie Redknapp got the goal that day for Liverpool, as Liverpool let in four in the second half. Not a happy Christmas for Reds fans, that one.

This was back in the 42-game era of the Premier League. Liverpool finished sixth in the end, losing 15 times across the campaign. Their goal difference finished as +7.

Liverpool were already trailing 1-0 to a Sergio Aguero goal at the Etihad Stadium when Sadio Mane was sent off for a high challenge on goalkeeper Ederson.

The afternoon then unravelled as Manchester City showed just how formidable a side they had become under Pep Guardiola. City powered to a convincing win with Gabriel Jesus and Leroy Sane both scoring two goals each.

Steven Gerrard’s final game for Liverpool turned into a nightmare as the Merseysiders were thrashed by the Potters on the last day of the season. Stoke City led 5-0 at the break after a Mame Biram Diouf double and further efforts from Jonathan Walters, Charlie Adam and Steven Nzonzi.

Gerrard did manage to get on the scoresheet but former Liverpool striker Peter Crouch had the final say.

Sunday’s walloping jumps to the top of the list, a defeat made all the more shocking by the fact the Reds are not only the reigning champions, but powered to the title in record time last season. Ollie Watkins opened the scoring after just four minutes and had a hat-trick before half-time.

Jack Grealish added two and had a hand in three others. John McGinn and former Everton player Ross Barkley got the others with Jurgen Klopp’s men netting twice through Mohamed Salah.