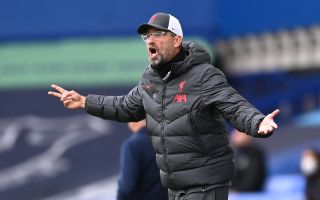 An angry Jurgen Klopp had two reasons to leave Goodison Park fuming after VAR cost his side the chance of victory in a Merseyside derby in which two key players sustained potentially serious injuries.

The Liverpool manager was furious Jordan Henderson’s added-time goal to make it 3-2 was ruled out for the tightest of offside decisions on review, while he was at a loss to explain how Jordan Pickford had not been dismissed and conceded an early penalty for a knee-high challenge on Virgil Van Dijk.

That tackle ended the Holland captain’s afternoon and Klopp admits the injury is “not good”, while the challenge which did result in a red card being shown to Richarlison also appears to have put Thiago Alcantara on the sidelines.

Van Dijk and Thiago both went to hospital for scans on their respective knee injuries after the game.

Jordan Henderson had the ball in the Everton net in stoppage time…— Football on BT Sport (@btsportfootball) October 17, 2020

“It is not good. Virgil played I don’t know how many games in a row, he plays with pain, but he couldn’t play on and that’s not good,” said Klopp.

“When I leave the pitch Thiago tells me in the Richarlison red card situation he thinks he got injured.

“Then coming into the dressing room people are standing around with a laptop and I say ‘What’s wrong?’ and they say ‘We have watched it back and we don’t understand why it (Henderson’s goal) is offside’.

“I am a real supporter of VAR – the picture I saw there is no offside, since then I have had 10 interviews and everyone tells me it was not offside and that doesn’t lift my mood.

“We lost one player in a situation where VAR was not involved with Virgil and maybe another one in the red card situation and scored a legitimate goal which didn’t count – so obviously not our day but the performance was the performance I wanted to see.”

Klopp alluded to the fact he thought Pickford may have tried to purposefully hurt Van Dijk, who had not missed a minute of Premier League football since January 2018.

“It was a clear penalty I saw and then we saw the flag went up. I thought they would still look at the foul but that didn’t happen,” he added.

“I don’t want to say Jordan Pickford wanted to do it but it is not a challenge how a goalie can do in the box.”

The Pickford incident came with Everton already trailing to Sadio Mane’s third-minute goal, which was subsequently cancelled out by Michael Keane’s first-half header.

Mohamed Salah thought he had won the game with his 100th Liverpool goal in 159 matches, a brilliantly instinctive volley, but a trademark Dominic Calvert-Lewin header levelled things up again.

In the 90th minute Richarlison went in high on Thiago to become the 22nd dismissal in 57 Premier League Merseyside derbies before Henderson’s goal was ruled out after Mane was adjudged to have been offside by a barely-perceptible margin.

Everton manager Carlo Ancelotti, who saw his Premier League leaders’ 100 per cent start to the season ended as a 10-year, 23-match winless run against their neighbours was extended, was happy with the performance.

Cant we just have attackers having the benefit of the doubt again if it’s too close to call ? We want goals don’t we ?— Peter Crouch (@petercrouch) October 17, 2020

“We could win, draw or lose. I am not talking about the result, the performance was good,” he said.

“We wanted to compete against Liverpool and we competed really well with good spirit.

“We never lost confidence, we were able to equalise two times, we had opportunities to go up with Richarlison hitting the post.

“The performance was satisfying, I am really satisfied.”

Despite another error of judgement by Pickford, Ancelotti refused to criticise his goalkeeper, who did redeem himself with three decent saves in the game.

“I think he played a good game, like the others. Good saves, he was focused in the goal, a good performance. I am not worried,” he added.