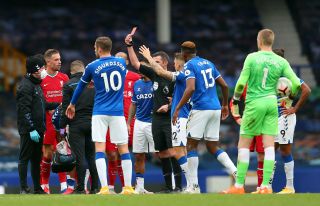 Everton twice fought back to draw 2-2 with Liverpool in a controversial 237th Merseyside derby at Goodison Park.

Sadio Mane, back in the team after recovering from Covid-19, put the visitors in front after just three minutes when he converted a low cross from left-back Andy Robertson.

Toffees keeper Jordan Pickford was fortunate not to have been dismissed for a knee-high challenge on Reds defender Virgil Van Dijk, which saw the Dutchman forced off injured with only 11 minutes on the clock.

Pickford was saved from a red card by a marginal VAR decision which ruled Van Dijk’s shoulder was offside.

Everton equalised in the 20th minute through a header from Michael Keane at a corner.

This Jordan Henderson goal didn't count in the end after a controversial offside call…— Football on BT Sport (@btsportfootball) October 17, 2020

Dominic Calvert-Lewin continued his fine scoring run with a towering header to equalise again on 81 minutes.

Richarlison was shown a late red card for a challenge on Thiago Alcantara, which left both players requiring treatment.

There was more drama deep into stoppage time when Jordan Henderson thought he had won it for the champions when Pickford fumbled his shot – but the goal was ruled out for the tightest of offside decisions against Mane.

In Saturday’s only 3pm kick-off, Southampton fought back to draw 3-3 against Chelsea with a stoppage-time equaliser from Jannik Vestergaard.

Goalkeeper Kepa Arrizabalaga made his first Chelsea appearance in almost a month, with £20million signing Edouard Mendy ruled out by a thigh problem.

Werner gave the home side the lead on 15 minutes, when he turned Saints defender Jan Bednarek before slotting in his first Premier League goal.

The German forward doubled Chelsea’s advantage in the 28th minute when he raced in behind, chested the ball on and then clipped it over the advancing Saints keeper Alex McCarthy – before heading into the empty net.

England striker Danny Ings hauled Southampton back into the game just before the break when he rounded Kepa.

Saints were level in the 57th minute after Che Adams latched onto a stray backpass from Kurt Zouma, only for Chelsea to quickly regain the lead just before the hour.

This time Werner turned provider when he was released by Christian Pulisic to set up fellow German Kai Havertz for a chipped finish.

Kepa produced a smart reaction save to deny Ings after new signing Theo Walcott had broken down the right.

Southampton, though, did find a way through in stoppage time when a free-kick was headed out to the edge of the penalty area, and Walcott guided the ball back towards goal, with Vestergaard nodding in.

Raheem Sterling’s first-half goal was enough for Pep Guardiola to get one over his old assistant as Manchester City edged out Mikel Arteta’s Arsenal 1-0.

Arsenal were forced into a late change before kick-off as David Luiz replaced Rob Holding, who suffered a hamstring problem in the warm-up, while new signing Thomas Partey was on the bench.

City went in front after a swift counter-attack in the 23rd minute when Sterling swept the ball in after Phil Foden’s shot had been parried by Arsenal keeper Bernd Leno.

The Gunners improved in the second half as Nicolas Pepe grew into the match, but were not able to conjure an equaliser as Luiz sent a 25-yard free-kick over the crossbar.