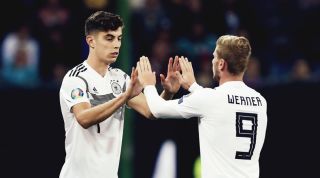 A new era begins now. Chelsea have catapulted themselves back into the ranks of the big spenders. Their extravagant outlay amounts to more than £200 million and includes three highly-rated scorers and creators. Timo Werner, Kai Havertz and Hakim Ziyech are new to the Premier League, but not to the game’s talent-spotters.

David Webb is the scout who discovered Wilfried Zaha and worked in recruitment for Mauricio Pochettino’s Tottenham. He has been casting an expert eye over the Chelsea newcomers for years; had he got his way, he would have taken one to Spurs.

“Timo Werner was at Stuttgart when I saw him first,” he said. Werner has joined after delivering 34 goals for RB Leipzig last season. Then he was 16 or 17 but sufficiently precocious that he was playing in a higher age-group category. “He was quite small but he was intelligent, his movement was very, very sharp,” Webb recalled.

“Sometimes you would see him as a striker, sometimes he would move left, move right and he seemed to move in sync with the players around him. Technically, he was very good and can score goals so you can see straight away he had an abundance of potential so even though he was small.

“He is one I followed a lot. We tried to get him at Tottenham but we couldn’t get him at the time. He has done the right thing in his development curve in terms of getting exposure in Schalke’s first team and going to Red Bull Leipzig and scoring the number of goals he has done.”

“He is definitely ready for that next step which is at Chelsea. He could either play up front on his own, he could play with one of the wide players close to a striker, in a two or in a three, he is so adaptable.”

FFT'S PREDICTED TABLES Where do our writers think the Blues will finish this season?

It is something he shares with Havertz, another Webb tracked in the youth ranks, and who signed for an initial £62 million. “I have seen him in the German development system,” he said.

“Creative as he is, he can also get in the box and score goals with his head so he is very brave, he is intelligent with his movement, quite quick but technically the way he can influence a game at such a young age is phenomenal.”

Versatility is a shared trait. Each of the arrivals gives Frank Lampard options. Webb sees the Moroccan Ziyech as more of a replacement for the departed pair of Pedro and Willian but explained: “It gives them another creative attacking player who, if they play 4-2-3-1, can play as a No.10 or even from the side and come in.”

PREMIER LEAGUE PREVIEW Are Chelsea ready to challenge for the title?

“When Ajax got to the semi-final of the Champions League [in 2019], he proved his value of being able to compete against world-class players and influence games.”

The signings fit their new manager’s ethos, Webb thinks. “The recruitment is always the smartest when it is what they need or what fits in with their style or ideology and philosophy so that Frank wants them to play a certain brand of football,” he said. “Any player coming from Ajax you wouldn’t necessarily put them into a team that plays long ball, so a team that builds from the back, that likes that to be creative and play through for their quick strikers. I think they have got a very, very smart signing.”