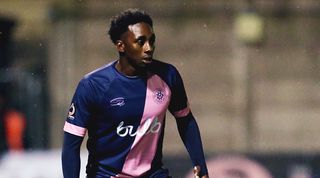 Football is as intrinsic a part of British culture as tea, the monarchy, Eastenders or tutting in when there are five people ahead of you in the queue at Argos.

On our small little island, we have thousands of football teams dotted about on fields, astroturfs and barely grass-covered slabs of mud. The top 10 tiers are eligible for the FA Cup. We have a culture of hope that wherever you are, whoever you are, glory isn't too far away. We define ourselves by our clubs.

In such challenging times, it's important to remember how character-forming and community-forming it has been, to stand on a slab of concrete, just as our fathers, grandfathers and their fathers did before them, for over a century. From the top of the perch to the bottom of the pile, every damn club matters.

But how many of them can you name? Due to Sporcle limiting answers to 300, we could only fit in the top seven tiers. Beyond the billion-pound stadia, how far does your recollection reach for each of these sides?

While you’re here, subscribe to FourFourTwo and save 48% – available until Christmas. It’s the perfect gift idea for anybody who loves football (including yourself)!