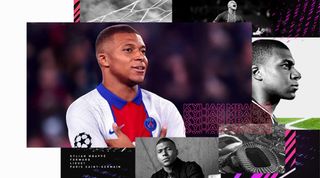 Here at FourFourTwo, we're very good at FIFA. And by very good, we can just about shoot and we're aware of the 'pass' control.

But out there on the worldwide web, there are those who take "very good" to a new level. From the professional players to esports champions, from the YouTube sensations to even the commentators, we thought we'd ask for some expert opinions on FIFA 21...

Chesnoid is a content creator with 273,000 subscribers on YouTube. He uploads two videos a day most weeks - and right now, we're glued to the Everton career he's doing...

1. Be patient in your play

"Whenever I'm asked by new or casual gamers about how to improve their game, I always lean towards one word. Patience.

"Much as you might like to tear around the pitch playing the most eye-catching tiki-taka football, or lunge into tackles like a virtual Sol Campbell in the rain, it’s by taking an extra second and timing your pass or tackle correctly that can make a massive improvement in the success of your offensive and defensive play.

"It may sound corny but it’s incredibly apt for this part of the game, practice makes perfect!"

Ryan Pessoa is a Manchester City Pro Esport Player and Red Bull Athlete. He focuses on Ultimate Team over on his YouTube channel.

"Letting go of the sprint button when dribbling in tight scenarios is extremely beneficial in making sure you keep possession of the ball."

3. Use the new dribbling controls

"Another useful thing that’s been added into the game this year is the R1/RB dribbling. This allows further close control from the player in possession and is extremely useful at the edge of the box. Hold R1/RB when you're making a move on the opposition to keep the ball more easily."

Fully - AKA Akima Byron - is a pro esports player. According to his Twitter, his first impression of FIFA 21 was how good Sadio Mané is in the game - so that's another tip for you...

5. Pace is more important than ever in FIFA 21

"This year on FIFA 21, pace is very important - more important than it was in previous years. So having fast strikers and fast defenders are very key, the likes of Joe Gomez, Rodrigo."

"I would say the most important of the new mechanics, from what I’ve picked up, would be the directed pass and go feature EA have added in. Practice Pass and Go in the Skill Games section - it can be a great help during match scenarios."

"Another great tip is if you’re looking to buy a new team, the cheapest point during the week would normally be Sunday or Monday - straight after the weekend. This is when all your favourite players' prices would have become affordable - it will then inflate back up during the week."

Venny - or Owen Venn - is a pro esports player for Southampton. He focuses heavily on FUT - check out his starter team in FIFA 21...

"Nothing comes easy if you want to improve and become the best, you have to put the time in and grind and apply the other tips to help you improve. Grinding is super important because the more time you put into it, the more you will learn about the game, such as what works and doesn’t work in your game style.

"Also remember just because you’re losing it doesn’t mean you aren’t improving, learn from the losses instead of raging about something you can improve on."

"This is the area of my game I need to improve most. I will pull a defensive player out of position to try to press the ball and get it early - and not think about what gaps I am leaving open.

"This leads to my opponent having an easy attack on me, so what I need to do - and maybe some of you guys need to do - is be patient and think about what the next step is. If you leave a space for the opposition to attack, what's your plan?"

"Every year there are stand out skill moves that are overpowered. You need to find out what the skill moves are and then add them into your game.

"For example, in FIFA 20 we had the drag backs and in FIFA 19 we had 'el tornado'. Every year there are skill moves that can be game-changing - for me, I think this year it will be the elastico and flip-flap.

"These skill moves come off super quick and are super confusing to defend against due to the way it comes off. Expect to see these skill moves used often in pro tournaments this year."

Richard Buckly is a FIFA esports commentator. He streams exclusively on Facebook gaming and got Pierre-Emerick Aubameyang in a pack this week (the lucky so-and-so). Not that we're jealous or anything.

"One of my favourite quotes is 'wins and lessons, rather than losses'. When you lose a game of FIFA, take tips from you opponent - how did they score? what formation did they use? Learning from peers and people better than you will only improve you as a FIFA player."

"Watching pros is a quickfire way of learning the new mechanics of the game as well as finding out the META (most effective tactic available). This meta will guide you through FIFA 21 and will definitely get you that extra win in FUT champions."

"This year in FIFA you can take control of all the runs off the ball, meaning you control where players move and groove in the final third. It will take a while to get used to, but by simply pressing both analogue sticks in together you can move players freely off the ball and create some devastating attacks."

BuckArmy is a content creator with 185,000 followers on Twitch. He also plays NBA 2K21 and COD - apparently there are other games out there not about football...

14. Watch streamers for tips (and for fun)

"A huge thing that can help new and casual players on FIFA is the accessibility of streamers. There are streamers for everything you could ever need help with. Trading to make coins, competitive players that can show you what works and doesn’t in the game, and streamers that will review your squad to tell you players that may work better for you.

"Learning these tips from streamers can make your experience on the game so much better and could potentially show you things you would have never thought possible. Also, you get to join awesome communities!"

PistolPete is a content creator with nearly 75,000 followers on Twitch. He also plays Madden and Steam Raiders among other games.

15. Get involved in Rivals, Squad Battles and Objectives in Ultimate Team

"Starting a Road to Glory account and spending no money on FIFA can be fun but also intimidating if you don’t know what you’re doing. I recommend getting on the game as soon as possible to grind Rivals and Squad Battles.

"This year in Rivals you can get major coins upfront by simply placing into a division and that only takes 5 games! After that I would recommend mixing in some Squad Battles as those rewards are tradeable and can pay out big if lucky.

"Lastly, I would focus on the objectives tab and work on gaining packs and coins through gameplay!"

Brandon Smith is a FIFA Esports Commentator and self-professed "Bad FIFA Player". Finally, a man we can relate to at FFT.

"Sounds complicated right? It really isn’t, each year there are brand new features that help to improve the game. This year there have been multiple changes including players' creative runs, positioning and passing. One of those features I've enjoyed is the new creative runs off the ball, this has allowed my attackers to create better chances."

17. Play against people better than you

The only way you’ll improve in FIFA is to stop playing your same mate who you keep thumping 5-0 and to test yourself in the world of FUT Rivals & FUT Champions. It’s where the best players meet!

FIFA 21 for XBox Series X pre-order: the new console is now available to buy – here's how you can play the latest FIFA on it

FIFA 21 for PS5 pre-order: the new console is now available to buy – here's how you can play the latest FIFA on it