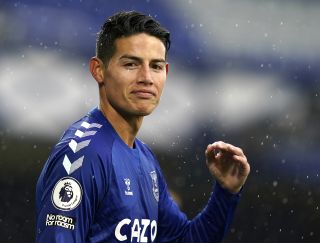 1. Everton out to end Merseyside misery

If it's the hope that kills you, Everton are in grave danger of death this weekend. Optimism in the blue half of the region has seldom been higher heading into a Merseyside derby. Everton are sitting pretty at the summit of the standings with 12 points from 12, while Liverpool are still reeling from that 7-2 thrashing by Aston Villa. Foregone conclusion, right?

Everton fans have 22 reasons to temper their positivity. That's the length of Liverpool's current unbeaten run against their neighbours, encompassing matches in all competitions stretching all the way back to the era of Roy Hodgson and Paul Konchesky. We can feel the shudders around Anfield from here.

Never one to miss a trick, the fixture computer has served up a treat with its scheduling of the first Merseyside derby of the season. When Everton and Liverpool walk out at Goodison Park on Saturday, it will be 10 years to the day since the Toffees last beat the Reds.

If not now, then when? Everton have started the season brilliantly, with James Rodriguez and Dominic Calvert-Lewin in sensational form. But Liverpool will be desperate to set the record straight after the Villa Park Massacre, and Sadio Mane and Thiago Alcantara are set to return to the starting XI. We can't wait for this one.

SPECIAL OFFER Subscribe to FourFourTwo for just £9.99 a quarter

Having worked hard to get his fitness levels up since returning to Tottenham a month ago, Gareth Bale is in line to make his first appearance for the club since 2013 when West Ham head north on Sunday.

No team in the Premier League has scored more goals than Spurs so far this season, a fact we're surprised Jose Mourinho hasn't been shouting from the rooftops. Son Heung-min and Harry Kane have been linking up magnificently, and the hope is that Bale will slot seamlessly into the frontline to give Tottenham even more firepower.

He might not be ready to start, but we can expect the Welshman to feature at some point. The last time Bale faced West Ham, he scored a stunning last-minute winner at Upton Park. Don't bet against him breaking Hammers hearts again here.

3. How will Man City cope without De Bruyne?

Kevin De Bruyne looks set to miss Manchester City's clash with Arsenal on Saturday after withdrawing from the Belgium squad earlier this week. Reports suggest he's a "major doubt" as Pep Guardiola prepares to lock horns with his erstwhile assistant once more.

Mikel Arteta will hand a debut to Thomas Partey at the Etihad Stadium, and Arsenal fans are understandably excited to see the new boy in action. Not having to face De Bruyne should make his maiden appearance easier than it might have been.

City still have an array of talent to call upon, with Bernardo Silva or Ilkay Gundogan the most likely replacements for everyone's favourite strawberry-blonde string-puller. De Bruyne is the man who makes City tick, though, and his absence is a boost to Arsenal as they seek their first win at the Etihad since 2015.

“The caretaker manager should have an understanding of Man United, and if you look at who has links to the club but is external, that doesn’t leave many realistic options," Paul Ince said following his former club's sacking of Jose Mourinho in December 2018.

"“The suggestion of Ole Gunnar Solskjaer makes me laugh, that has to be a joke. It’s absolute madness. If it was me, I'd pick Brucey today."

'Brucey' (why are footballers' nicknames so uninventive?) did end up at United, but not the Manchester variety. Newcastle fans were pretty underwhelmed when he succeeded Rafa Benitez last year, but he's done a thoroughly decent job to date.

He even beat Manchester United last season - a career-first for a man who's faced his ex-employers 24 times as a manager. With the Red Devils coming off the back of that 6-1 demolition by Tottenham, Bruce may well make it two from 25 on Saturday.

5. Werner faces a manager who knows him well

Four games in and Frank Lampard's yet to decide what his best line-up looks like. That's hardly a surprise given how active Chelsea were in the transfer market, with Kai Havertz and Timo Werner joining the likes of Tammy Abraham, Callum Hudson-Odoi, Mason Mount and Christian Pulisic as attacking options at Stamford Bridge.

Werner began the campaign through the middle, but his last few appearances have come in a left-sided role. He's looked sharp at times, not least in his winning of a penalty against Brighton, but is still awaiting his first Premier League goal.

Werner faces a former manager on Saturday when Ralph Hasenhuttl takes his Southampton team to west London. The striker scored 42 goals in two seasons under the Austrian at RB Leipzig, but he'd settle for one against him this weekend.

What were your original plans for Monday evening and when did you decide to watch Leeds instead? Marcelo Bielsa's side have been even more entertaining than anticipated so far this season, and their 1-1 draw with Manchester City last time out was a genuine thriller.

Monday's meeting with Wolves could be more of a slow-burner, but it should be an engaging watch nonetheless. Nuno Espirito Santo will be content for his team to play on the back foot, absorbing the hosts' pressure before hitting them on the counter-attack.

It's an approach that could bear fruit, although Wolves can't afford a repeat of their defensive slackness in their last away game, a 4-0 defeat by West Ham. Leeds have scored in every match to date, but Nuno will hope his 3-5-2 formation can frustrate the Whites.

It's been a frustrating start to the season for Brighton. Graham Potter's side have performed pretty well in all four of their fixtures to date, yet they've only taken three points from a possible 12.

That was a problem for Brighton at times last term too - never more so than in their 1-1 draw with arch-rivals Crystal Palace. Albion took the sting out of the Selhurst Park crowd last December by pressing well in midfield and dominating possession, but they failed to ram home their advantage and ultimately allowed Palace back into the game in the second half.

Roy Hodgson will be happy to let Brighton control the ball again, particularly as there'll be no home fans to demand Palace "get into 'em". But if the Seagulls are to win at Selhurst for only the second time since 2005, they'll need some penetration to go with their possession.

Does second syndrome season exist? Maybe, maybe not. It certainly didn't afflict Newcastle in 1994/95, Nottingham Forest in 1995/96 or Wolves last time out.

Even so, Sheffield United have reason to fear the dreaded SSS right now. They've begun their second campaign back in the top flight in the worst way possible, taking zero points from their first three outings.

Fulham are also stuck on nul points having lost to Arsenal, Leeds, Aston Villa and Wolves since their return to the Premier League. Still, at least Tony Khan's on top of things.

At least one of these sides will get off the mark at Bramall Lane this weekend. United start as favourites, but the pressure will start to build if their run of defeats continues. There's no vaccine for second season syndrome.

While you're here, why not subscribe to FourFourTwo? Just £9.99 every three months for 13 issues a year of the greatest football magazine in the world