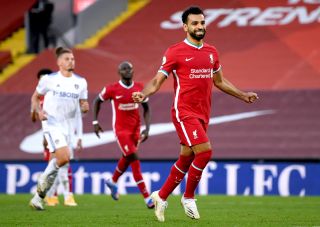 Mohamed Salah nabbed the first hat-trick of the new Premier League season, as Liverpool squeaked past promoted Leeds in a 4-3 opening day thriller at Anfield.

To celebrate the Reds forward, here's 10 more hat-trick you might have forgotten about – but shouldn't.

Before Cantona moved to Manchester United, the enigmatic Frenchman was determined to show Leeds fans exactly what they'd be missing. He started that season with a hat-trick in the Charity Shield against Liverpool before adding the Premier League’s first-ever treble against a miserable Spurs side.

In a game that ended 5-0 to the Whites, Leeds were gifted an opener after a howler from goalkeeper Erik Thorstvedt – and then Cantona began his spree. Justin Edinburgh’s attempted defensive header fell straight to the Frenchman, who fired a right-footed drive past Norwegian Thorstvedt. David Batty found him with a cross he headed in for No.2 shortly afterwards, but his hat-trick didn't come until the second half; strike partner Lee Chapman's nuisance work freed up space for Cantona, who volleyed through bodies to score Leeds's fourth.

That was as good as it got for the title holders in a season that saw them finish 17th. For Cantona, running Spurs ragged was his thrilling prelude to becoming one of the Premier League’s greatest-ever strikers.

Wallace’s predatory instincts helped Leeds to the old Division One title in 1992, but the following season brought with it tremendous pain. He was called up to the England squad for a friendly against Spain, but injury denied him a debut, and he was never summoned by his country again. While that stung, it didn’t help that he became the first Premier League player to score a hat-trick and not end up on the winning side in the same season.

Coventry supporters were bidding farewell to the popular Spion Kop stand at Highfield Road, but were denied victory themselves in this game despite leading 3-1 against a then-10-man Leeds. Wallace had initially hit an equaliser before Howard Wilkinson's strugglers fell two behind, but he went on to complete his treble courtesy of late strikes which made an emotional home support even more tearful.

Leeds fans, in stark contrast, invaded the pitch as if they'd dramatically avoided relegation. They'd actually achieved that the previous week, but having completed a whole season in which they'd failed to win away from home, they were probably just glad it was all over.

There wasn’t much to shout about for Swindon in their one and only Premier League season, and while Fjortoft’s treble wasn’t a Bergkamp-esque clinic in finishing – two penalties (both given away by the same player) and a poacher’s tap-in – it provided a rare moment to savour for the Robins during a (42-game) campaign that only yielded five wins.

Fjortoft had a decent season, scoring 13 times. Swindon did not, relegated with 100 goals conceded.

Wouldn’t Aitor Karanka’s profligate Boro just love to have a striker of Fabrizio Ravanelli’s class leading their line. Ravanelli arrived on Teesside to much fanfare in the summer of 1996, having just won the Champions League with Juventus (just consider that for a second), and made an immediate impact against Roy Evans’s Liverpool.

Affectionately dubbed the 'White Feather', he was anything but gentle against the Reds on his debut, pulling his shirt over silver barnet three times during a thrilling 3-3 draw at the Riverside.

At 27, Ravanelli was cultured and experienced enough as a marksman to capitalise on the Neil Ruddock-sized hole in Liverpool’s defence. An emphatically dispatched penalty preceded two opportunistic finishes, with the Boro fans ending the day by singing that Ravanelli would be the man to deliver silverware for them.

He wasn’t that good, unfortunately, despite Boro reaching two domestic cup finals. In fact, regular outbursts throughout the season meant he was unpopular by the time Boro were relegated at the end of the season, so he packed his bags and joined Marseille instead.

Windass was at the centre of this ludicrously entertaining eight-goal thriller between two sides who threw caution to the wind despite their perilous positions at the bottom of the league.

Paul Jewell’s men were desperate for a win to aid their survival battle, but when the Rams went ahead after just 23 seconds, the prognosis was decidedly bleak. After six minutes it was two, thanks to Branko Strupar’s free-kick.

Some Bradford fans feared the worst, but Windass wasn’t prepared to wallow in self-pity. The striker showed how skipping a summer holiday in favour of an intense training regime could work wonders, scoring all three of his goals before half-time – the second a wonderful effort from all of 30 yards – for the Bantams to go into the break 4-3 up.

But while Craig Burley netted his second penalty on 52 minutes to equalise and end Bradford’s ecstasy, it was something of a red-letter day for Windass. While Bradford’s great escape on the final day may be the only episode remembered, they did it with three wins from their final four games and Windass’s pivotal role in keeping their top-flight dreams alive on this thrilling afternoon.

Yes, it happened. Arguably the most unlikely Premier League hat-trick hero, Watson’s dead-eye aim piled the misery on a doomed Leeds side and exhilarated Goodison Park. David Moyes’s bold decision to bench an impressive teenager by the name of Wayne Rooney was vindicated by the interval, with Watson bagging a (quite brilliant) brace alongside Duncan Ferguson’s strike.

Watson was used primarily as a right-back during his Toffees career, but was deployed to devastating effect on the right of midfield against Leeds. Goals were in Watson’s DNA, though: he started his career as a striker for Newcastle and the Geordie-born lad humiliated Peter Reid’s side in a manner that would have had Alan Shearer rubbing his hands with glee, showing particular panache when a neat one-two with Ferguson ended with an unstoppable rocket into the roof of the net for his first goal.

The third wasn't half bad either: the deft lob over a stranded Paul Robinson to put the seal on a super treble.

David Bentley, One-on-One: “I joined Spurs thinking Ramos would be another Wenger – but it was a nightmare”

There was a time when likening Bentley to Beckham wasn’t laughable, and performances like this certainly reinforced his claim to be England’s next Golden Balls. A day after joining Rovers on a permanent basis from Arsenal, Bentley stunned Fergie’s men in an unforgettable clash at Ewood Park.

Bentley’s first two rubbished the old adage of making your own luck. He reacted quickest to Morten Gamst Pedersen’s ferocious free-kick crashing off the post for the opener, before capitalising on a comically inept communication breakdown between Rio Ferdinand and Edwin van der Sar which allowed him to tap home a second.

Bentley’s request to complete his hat-trick from the spot was politely declined by Lucas Neill, but the precocious winger managed it in much more clinical style, driving a sweetly struck right-footed effort with Beckham-esque poise and technique.

It never quite panned out for post-Blackburn Bentley, though, who retired at the age of 29 citing a loss of passion for the sport. It’s a shame but, on the bright side, he belongs in an exclusive club: scoring a hat-trick against Ferguson’s United.

Most Boro fans would prefer to pretend that Afonso Alves never happened. Well, he did. He was a flop, but a flop who showed flashes of greater things against City’s unfortunate impression of a Premier League team.

City were set to wave goodbye to Sven-Goran Eriksson, but Alves – whose career at the Riverside was every bit as laughable as his unveiling alongside feather-clad dancing girls and a samba band – decided this dead-rubber match was the time to show his ruthless streak.

The hat-trick had technical merit, too, helped somewhat by Richard Dunne’s 14th-minute dismissal which prompted an astonishing capitulation. Alves tucked his first away confidently just inside the box, then grabbed No.2 with a fortuitous dink over (sort of) Andreas Isaksson. His third, a simple finish after a square ball from Jeremie Aliadiere, completed Boro’s biggest win in the top flight for 58 years. It also guaranteed that Eriksson’s showdown talks with City owner Thaksin Shinawatra ended with the Swede’s swift dismissal.

His English football career may have lacked the compelling narrative of a Pixar production, but he still had Baggies fans smiling like they'd just seen Woody and Buzz falling with style in real life. Newcastle fell with anything but. They were 3-0 up and cruising by the 47th minute... until Tchoyi triumphantly intervened (inexplicably donning the No.5 shirt).

Roy Hodgson's half-time words must have touched a nerve for the 28-year-old, who coolly slotted in his first, then made a mockery of Fabricio Coloccini before driving home his second with a thumping finish. He saved No.3 for the last minute, meeting Jonas Olsson’s cross with a diving header to wipe the smile off Alan Pardew’s face.

Gomez’s start to this game against Reading was marked by boos from his own fans, his indifferent form having proved enough for the Latics faithful to make their feelings about the Spaniard known. His response duly shut them up.

The first goal came from a rebound after Adam Federici failed to grasp his initial effort, before adding a second with a brilliant diving header. But a Sean Morrison strike and Ali Al-Habsi's own goal meant the score was locked at 2-2 in stoppage time.

Gomez joined Sunderland and failed to produce such heroics for the Black Cats during his two-year stay there. He’s seeing out his later years back in Spain, currently at Segunda side Rayo Vallecano.

While you're here, why not take advantage of our brilliant subscribers' offer? Get the game's greatest stories and finest journalism direct to your door for less than £3.80 an issue. Cheers!

Premier League live stream: how to watch every game from anywhere in the world