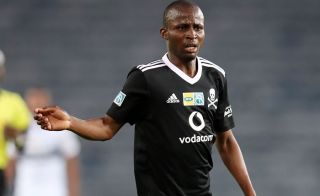 Orlando Pirates edged 10-man Cape Town City 1-0 in their MTN8 quarter-final on Saturday evening, with new signing Terrence Dzvukamanja getting the winner in the first half.

City on the other hand were looking to build on their strong finish to last season but had lost main forward Kermit Erasmus to Mamelodi Sundowns.

Dzvukamanja started brightly and almost got his side into an early lead but his header from a Gabadinho Mhango free-kick flew over the bar.

The Citizens then began to stamp their authority as they controlled the early possession without creating any clear-cut chances in the opening 20 minutes.

Pirates’ new Zimbabwean striker Dzvukamanja was then handed another opening with 23 minutes gone as right-back Wayde Jooste checked back onto his left foot before sending in an inch perfect cross which was expertly direct by the former Wits striker into the top left corner.

After going a goal down things got worse for the Citizens as Fagrie Lakay received his marching order for an over-the-top challenge on Jooste with 33 minutes played, leaving the Cape side with an hour left to play with 10-men.

1-0 to the Buccaneers at the break with City facing an uphill battle to get back into the game.

Pirates started the second half on the front foot looking to kill off the game and had a couple of chances but a combination of good goalkeeping from Peter Leeuwenburg and desperate defending from the City backline denied Pule and Mhango in quick succession.

Jan Olde Riekerink’s side almost got back into the game when Thabo Nodada released a shot from just outside the area, but it rustled the top netting as it whistled over the bar.

The tempo of the game began to drop off in the final stages of the game with neither side able to find a way to goal.

Pirates winning 1-0 and advancing to the semi-finals of the MTN8 for the first time since 2014.